A wonderfully accessible article on Understanding Kaiseki by Vaughn Tan (Twitter: @vaughn_tan ) in The Atlantic from 2009 (excerpt below):


Definitions of "kaiseki" often emphasize the multicourse, highly-seasonal nature of a kaiseki meal, and compare it to tasting menus and "Western-style haute cuisine"; it is the kind of meal you would go to When Only The Best Will Do. This is true. A kaiseki restaurant is a bit like a Michelin-starred restaurant: both will likely feature labor-intensive preparations, use choice ingredients, and be expensive. But there's more to kaiseki, at least the Platonic ideal of it that was described to me.


Kaiseki can be written in Japanese using two sets of ideograms: the first, 懐石, stands (approximately) for "stone in the robe;" the second, 会席, stands (again approximately) for "formal occasion." There is broad agreement that the second evolved out of the first. The stone in the robe form of kaiseki is much rarer today. This branch derives from the tea ceremony and from the vegetarian cooking traditions of Zen monasteries (you may sometimes see it referred to as shojin ryōri), and emphasises economy and wise use of materials instead of lavish ingredients and showing-off. The story (too convenient and thus singularly unconvincing) is that the food was so austere that monks in temples would warm stones and keep them in their robes next to their stomachs to ward off hunger pangs--hence the name. (Vaughn Tan, Understanding Kaiseki, The Atlantic, October 8, 2009)


The true exponent of Kaiseki in Toronto is Masaki Hashimoto, owner of the eponymously named  Kaiseki Yu-zen Hashimoto ), whose meals range from $200 to $300 per head depending on the option chosen (as per below) 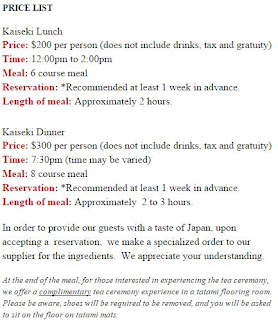