Some stories need no words

If you haven't yet heard all the buzz about Mark Huebner's wordless novel, Let Go, blame it on Omnicron. Part graphic novel, part lithography, and complete entertainment material.
Mark was gracious enough to share not just some of his thoughts about writing the book, but also a few of the linos that he worked through during the journey.
While Let Go is entirely wordless, we're glad Mark was able to share his journey in "writing" the book, in words.
Advertising professionals will relate to this story
A story about the universal feeling of being Let Go. The heartbreak. the
Q: What do you want readers to take away from your book?

A: From the outset, I wanted the reader to feel happy and reassured after finishing Let Go.
Now, to reach the end of any book, the reader must be entertained, engaged, and cheering for the main characters.

As the narrative for Let Go took shape, I looked forward to the book immersing readers in a life that spans significant societal changes and how we live. Let Go is a way to reach a new generation of creators who are exposed to a relentless barrage of negativity. They may feel forgotten but it's my hope that Let Go reassures them that living the creative life is worth the struggle.

All that said, I hope readers of Let Go take away something I never originally intended. Something that is unique and significant to the reader's own experiences.

By 2016, other artists had left the project for a variety of reasons. To fill the book, my original short story of 10-15 blocks was expanded to 45 then 60 blocks. George finally proposed that if I could write a 90-block story, they'd publish it separately. Extending the story took at least 4 months. I was working fulltime at the healthcare division of Ogilvy advertising and would write on the streetcar during my commute.

Carving the blocks took the most time. My experience with linocut was zero. But I can draw and was told just to transfer my illustrations to the linoblocks and someone else would cut them. After the pictures were drawn, George suggested I carve a block of my own. I did and liked the result. George liked what he saw too and encouraged me to carve them all.

I got a little more time to spend on Let Go in 2017 when I was let go from Ogilvy. While looking for work is fulltime job in itself, the process working on Let Go gained momentum. In early 2019, the first covid lockdown came to the rescue by allowing me to isolate in my studio and finish carving and printing the blocks. In early spring of 2020, the prints were scanned and delivered to The Porcupine's Quill press for printing. The pandemic and other factors delayed the release of the book from the fall of 2020 to the fall of 2021.

Q: Where did the idea come from?
A: Long before enjoying the balmy winters of Toronto, I grew up in Winnipeg. Sudden prairie blizzards would blow in so hard and cold, you could barely breathe. People who were trapped by the storm in the city after the shops closed would often find a cardboard box—or grab one that blew into them—and put it over their head. They'd cut a slit in it and keep walking. The box would calm the air around the face allowing them to breathe. This became the dominant visual element in Let Go.

Boxhead Man was the central figure in the short story version of Let Go. I just needed 10-15 blocks that were visually interesting and supported the concise narrative arc: Guy in storm. Puts box over head, peering out through a slit. Reaches home and peers out at storm through a gap in his Venetian blinds.
Once the short story extended past 30 pages, the need for a stronger story became obvious.

Keep in mind this is my first wordless novel AND published work of fiction. I made a conscious decision to simplify the characters, relationships, and time. That meant instead of the objects reminding the main character of different people or time periods, they would focus on one person who came into his life for a limited time and then disappeared.

The main characters memories in Let Go were simply to motivate why he had the object, why it was significant, and the locations that triggered his memory.
Q: Why did you use this particular medium for your art?
A: George Walker, the wordless novel acquisitions editor for The Porcupine's Quill press, wanted to create a short story anthology showcasing Canadian author/artists. I had been working on another graphic novel but didn't have a publisher for it. So I decided to work on a short project that was backed by a respected publisher and established editor.

As a visual art agnostic, I can work with traditional and digital media. I saw the prospect of learning linocut to tell a wordless story as an opportunity to tell a timely story in a powerful way.

As the first blocks for Let Go were carved and printed, I saw how brutally honest and beautifully direct they expressed the narrative. The difference I saw between my final pencil drawings for Let Go and printed proofs was dramatic in every sense of the word. The medium elevated the story and characters of Let Go in ways I never expected.

Q: Any advice you would give for artists?
A: Action cures fear. Pitch your stories or exhibit your artwork as often as you can.

Q: Looking back, what did you think about the process? Would you have done anything differently?
A: The process for creating Let Go was a challenge due of my own learning curve. Thanks to what I learned working on Let Go, the process for my second wordless novel, Off the Cuff, is much more efficient.

Q: What surprised you the most from the process...perhaps that A-ha moment.
A: In my experience, writing is a rational process; drawing is highly intuitive. I didn't expect that words in print can change meaning when translated as an image to tell a story.This resulted in editing or revising story details while drawing or even carving the linoblocks for Let Go. On a few occasions, I'd be drawing an image for Let Go from a clearly defined description I wrote. But as I'm drawing it, I include a new element or delete an existing one. Or I see that the picture rings false. So I draw what I believe is the right image. That usually meant revising blocks that appear before or after the newly-revised block. In the end, Let Go benefitted greatly from these visual edits.Me the professional writer had to collaborate with me the passionate artist. 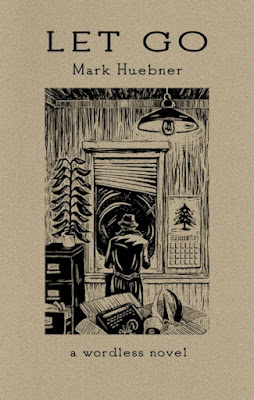